There’s nothing like fresh Dungeness crab.  There’s also nothing quite like picking it in the dark.  By the time Dennis got our trailer parked and set up, it was completely dark.  You really don’t want to pick crab at a dinette inside an almost-new trailer with carpet.  At least, I don’t!  So we moved a picnic table under the awning, positioned two cars with headlights pointing at the table (we didn’t have any lanterns because we aren’t woods camping), and picked crab for a couple of hours, eating as we went.  Well, some of us ate as we went.  Some didn’t.

Everybody has their own way of eating fresh crab.  Some people pick and eat as they go.  My brother cracks the legs and claws and eats as he goes, then picks the bodies into a bowl and eats them with salad.  My husband picked a big bowl full, and then ate it all at once.  My sister picked into a bowl a little at a time, ate until she was full, then picked a big bowl to take home for crab omelet this morning.

I like to mix leg meat and body meat in the same bowl, pour a little melted butter over, squeeze a lemon wedge on it, and eat it with a fork.  That’s the first batch.  Then, for my second batch last night, I added some avocado cubes, a little green onion, some cherry tomatoes I’d brought from home, a dollop of mayonnaise, a squeeze of lemon, mixed that all up, and ate it with a fork.   (I’d have added some chopped or sliced hot peppers if John’s hadn’t been bad and if I’d remembered to tell Dennis to bring mine from the garden when he brought the trailer over.)

We ate as much as we could hold last night, because you eat while the eating is good.  You never know how many crabs you’ll get the next day from the pots or rings you have to go out and pull.  You never know if it’s going to be too rough to go out and get them.  The small boats couldn’t go out yesterday.  The ocean, as my menfolk like to say, was ripped from all that wind.

But this morning they’re going with a friend of my brother’s to pull his pots, which were put out two days ago, so they should be bringing back fresh crab for lunch and supper.  If there’s more than we can eat for lunch and supper, we’ll pick it out, vacuum seal and freeze it, and take it home.  We never take more than a limit and never keep more than we’re supposed to.  It’s not worth a ticket.

I have little cuts on my fingers from crab shells and salt.  I have the utmost respect for people who pick crab for a living, as well as those who go out to the deep water and bring them in for packing.  The memorials at the boat basin, refurbished beautifully since the last tsunami, testify that fishing is a hard way to make living.  Fishers are hardy folk.  Sometimes, they don’t make it. 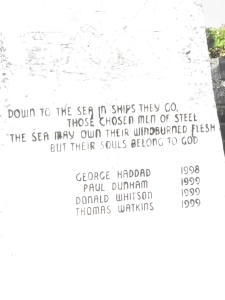 Last night, I was baptized by crab several times (that’s when you crack a leg or claw and get squirted with crab juice), so I put aside my fisherman’s sweater and dirty jeans for today’s picking.  By the time I get home, those clothes will smell to high heaven.  But I’ll have been in crab heaven for three days, so I’ll bear with those smelly clothes all the way home.

Today, I get to spend some time with old friends before I come back to pick crab for lunch and dinner.  I’ll tell you, there is nothing better than hot crab sandwiches.  Pull ‘em out of that boiling water, let them cool off enough to handle, pick one and put the meat on French or sourdough bread spread with mayonnaise, squeeze a little lemon, and find crab heaven. 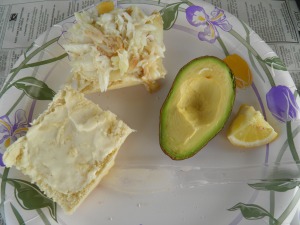