Goodbye to Wales, Hello to Yorkshire 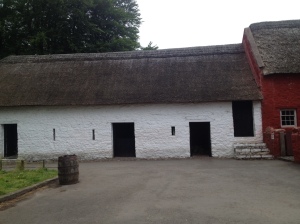 We spent two nights in Wales but were not able to download pics last night.  It’s a tedious process, and I can’t download any of mine.  Frustrating!  But truth be told, Amy takes better photos on her i phone than I do with my camera!  Yesterday, we drove nearly the length Of Wales in one day.  The roads were extremely narrow, winding, and occupied frequently by both sheep and large farm vehicles.  I wish so much that I could post my pictures of Wales, but that will have to wait until we get home.  In the meantime, here are some pics Amy took ar St. Fagan’s Welsh National History center.  Above is one view of an old Welsh farmhouse. 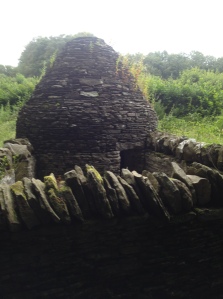 Sat Nav (she has an English accent and we refer to her as “She.”  “What did She say?  Is She muted again?”) has been a tremendous help but last night She got us well and truly lost, so we did not get to our room until nearly 11 p.m.  Mary, our hostess for the night at Cartref Guesthouse (in a charming Georgian row house tucked right up against the old city wall), had to talk us in.  Thank goodness we finally got the phone working!  Mary was so kind, and she’s a great cook.  I tried blood sausage for the first time, and it was good!  After breakfast and a brief exploration of Carnarvon Castle, we hit the road.

We decided, because we were so tired from our previous day’s travels, that we would skip our side trip to Eyam, the plague village, and come straight to York.  It took a long time to go a very short way because we had to half – circle round Chester, Manchester, and Leeds, very large and busy cities.  And it was raining, sometimes quite heavily.  We had wonderful weather for the first week, but it has been the more typical drizzle followed by downpour followed by drizzle, and so on, for the past two days.  I left my new raincoat in London, and Amy’s isn’t much good, so we bought what we call our yellow duckies, which are okay in a drizzle but not much good otherwise.  So tomorrow, or , as be tonight, in York, I must buy a rain jacket.   It appears I shall need one.

York promises to be very interesting.  When we walked out for dinner tonight, the bells were ringing in the Minster, and the music went on for at least 30 minutes.